Our current culture likes to tuck people into little boxes for matchmaking, and my little box was pretty unlikely to match.  I'm in my 60s, a woman, identifying as femme, attracted to femme, a demisexual sapphic queer person, with a transgender history.  Sapphic, old, femme, and trans is pretty much an undatable combination.  Only 9% of lesbians would even consider dating a trans person, and 0% over 60.  Femme is generally shunned except by other femmes. I was resigned to living alone as the cost of my transition.

I did have online friends, folks I could message privately and chat with through online forums.  I spent some time moderating a few forums, and that meant interacting online with other moderators to solve problems and keep things running smoothly.  I found myself interacting with another of these moderators frequently, and my chats with Laurie often drifted from the task at hand to more friendly banter. 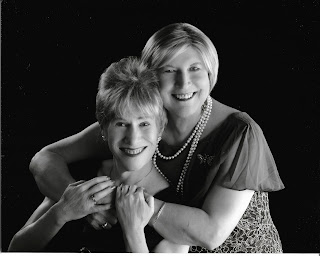 Now, Laurie liked driving and road trips, and had described long trips across the country that she had taken.  I had never done such a trip since I was a child, beyond a few trips up and down the West Coast.  We bantered about her coming to my area, and how I would get a new room ready for her in the place I had just bought.  It would need to be suitably equipped, with the proper eyebolt and restraints, I joked.  She went along with the joking, adding touches about needing to hunt me down.

It turned out that she was serious about wanting to visit, but didn’t have my address yet.  I provided that, and finished getting my guest bedroom ready for company.

Laurie drove overnight to get here, several hundred miles, and I was very happy when she made it here safely.  Perhaps a bit too happy, for when I saw her in the building lobby, according to her I launched myself through the air and knocked the wind out of her with that first hug!

We spent several days together, sharing meals, talking, and walking through the neighborhood.  I felt close to her, connected in some ways by common experiences in our lives, from childhood through the losses we had as part of coming out.  At the dinner table, a few times Laurie would step behind me and rub my shoulders, helping ease the muscle tension that I often had.  After a few times, this developed a bit of a tingle in me, a sense of something waking!  I think she had managed to establish an emotional or romantic connection to me, even if unintentional.

Oh, I responded, tilting my head back, eyes closed and lips pursed.  Nothing.  As she rubbed my shoulders another time, I reached back and stroked her legs.  Nada. Zip.

I didn’t know if she was uninterested, not getting the message, or perhaps something else.  I was a bit frustrated, as Laurie had managed to make that connection that my demisexual nature needed and, well, urges were awakening.  Her visit was coming to a close, and i resolved to do something.

We took her bags down to her truck and loaded them.  We talked for a few minutes, and she gave me a hug in farewell.  I took her face in my hands, and kissed her on the lips, not a peck but something lingering.  That startled her.  We talked for a few more minutes, where I tried to explain that I had some feelings for her.  Time to go, we hugged again, and once again I kissed her.

As she drove away I teared up a bit, but on her long drive she frequently paused and messaged me.  Apparently I had given her something to think about on the long drive home, and she rather liked the idea.

Laurie was back in a few weeks, in my home and in my life, and we have been together far more than apart ever since, sharing road trips, cruises, meeting new friends together, and loving life and each other.

We recently became engaged, exchanging rings on a cruise to Hawaii, and are enjoying life with one another.  We just celebrated our two year ‘Smoochiversary’, two years since that first kiss by her truck.

I'm Laurie and I vouch for this story. I was there. It's true. And I am thankful Michelle came into my life when she did. What she did not mention is that, I believe she was instrumental in my being here today.

You see, I was just beginning to emerge from a deep depression. By my reckoning, I had 2 -3 weeks left to live. Antidepressants had just begun to work and had allowed me to make this visit. I had not yet given up my plan to end my life in a tranquil forest grove once spring had sprung. Surrounded by emerging new spring growth and quiet sounds of life all around me I intended to end my life with a shotgun shell so I could once again be at peace with myself.

Michele changed all of that and gave me a reason to live. I once again had a purpose in life and someone to live it with. I love her and she loves me. Life is good (ok better) again. Thanks to finding a love I was not looking for.

Posted by Michelle Jean Paquette at 5:10 PM No comments: