Call To Worship - March 31, 2019 - "THE ADVENTURE OF GETTING OLDER" and Trans Day of Visibility

Rev. Sammons will explore the adventure of getting older, both as a minister now retired and as a person who wants to remember the poets adage: “Birth and death are the landmarks but it’s the field between that’s important.” Rev. David Sammons is the Minister Emeritus at MDUUC.

Rev. Sammons is building his sermon on an excerpt from “The Fountain of Age” by Betty Friedan.

“Birth and death are the landmarks but it’s the field between that’s important.”  OK, where was this advice 50 years ago when I needed it most?

It was impressed on me at an early age that I had a duty of self-sacrifice, a duty to live my life for others, and that actions for myself were selfish.  I spent much of my life doing this, living the way others demanded.  I essentially marked time, rusting away, soul corroding, waiting for death to ring down the curtain on this performance.

Betty Friedan made the point in “The Fountain of Age” that wearing out is far preferable to rusting out.

Several years ago, I had a crisis of sorts that forced me to re-examine the way I lived my life.  I acted. Rather than rust out, I was going to live, live MY life, and see if I could wear it out instead. 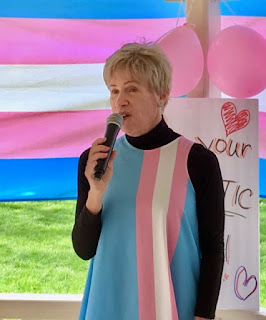 This is the Transgender Day of Visibility, a day to show your support for the trans community. It aims to bring attention to the accomplishments of trans people around the globe while fighting fear and prejudice, by spreading knowledge of the trans community.  This is not a day for mourning: this is a day of empowerment and recognition.

This year, we need allies more than ever.  No, what we need are co-conspirators!  Come and join us at 4 this afternoon in Civic Park, downtown Walnut Creek!

For the transgender communities, today is a day to celebrate our lives, our successes of the past year.

For my trans siblings, we who transcend gender have looked beneath the surface, and have seen depths that most do not realize even exist.  We know these depths within ourselves, these places that most may never encounter. We know the strength, the resilience, and the wisdom we hold deep within us.

Now, let us all, together, explore the adventure of getting older, and perhaps  find ways to wear out rather than rust out, as we worship together.

Posted by Michelle Jean Paquette at 6:00 PM No comments:

Waiting for “a more convenient season”

"First, I must confess that over the past few years I have been gravely disappointed with the white moderate.

I have almost reached the regrettable conclusion that the Negro’s great stumbling block in his stride toward freedom is not the White Citizen’s Counciler or the Ku Klux Klanner, but the white moderate, who is more devoted to “order” than to justice; who prefers a negative peace which is the absence of tension to a positive peace which is the presence of justice; who constantly says: “I agree with you in the goal you seek, but I cannot agree with your methods of direct action”; who paternalistically believes he can set the timetable for another man’s freedom; who lives by a mythical concept of time and who constantly advises the Negro to wait for a “more convenient season.”

Reverend King’s words still ring true, and apply even today to the struggle of all marginalized people to be treated as equals and to dispel the hierarchy of privilege imposed by Western Colonialist culture.

I hear these words, “Not now.  It’s not your time.  Wait for a ‘more convenient season’, as we have other priorities.”  This saddens me.

Within the path of my own life, I see all too clearly the intersectional nature of the same forces that hold back people of color, the differently abled, the queer community, and transgender people.  None of us quite fit the Western Colonialist culture.  We are all seen as somehow living life improperly, due to factors beyond our control. There’s that taint of the broken concept of ‘original sin’, with our differences seen as somehow being more sinful, thus placing us lower on the hierarchy of privilege.

I think that even those of us involved with a faith that has no room for the concept of original sin have, by being raised and living within a Western Colonialist culture, incorporated the cultural concept into our patterns of thought and action.  There is a subtle tendency to place obligation on those whom we see as somehow less worthy, less privileged or more damaged, even when our intentions are good.

We see this placing of obligation in patterns of speech, those little conversation starters and commentary that some see as harmless, but place obligations on the less privileged.  These often carry demands that others justify their presence, or even their existence, demands that are simply not present between privileged peers.  They may serve to put others in their place on a perceived hierarchy of privilege.

“No, where are you REALLY from?”

“Oh, did you see the dress he is wearing?”

“You don’t act like a normal black person, ya know?”

“I just don’t understand why you’d want to mutilate your body.”

We call these microaggressions, although there really is nothing “micro” about them to the person on the receiving end.  Impact is rather different than intention, and whether a person is marginalized by nationality, race, orientation, ability, or gender identity, it hurts to be reminded of having less privilege.  It hurts to be put in what others believe is our place.

It hurts to be told that it is not yet our time.  It hurt when I was 15 years old, and it still hurts to hear this at age 65.  I wonder if I will live long enough to see our time come.

I long for the day when I will not be viewed as being wrong for simply existing.  I hope for the day when simply living as our authentic selves will be accepted by the world, rather than seen as proof of our unworthiness, our sin, our mental illness, or other codewords for hatred.

Is it possible to look to common cause, the intersectional source of much of the poor behaviors that we see as white supremacy culture, as homophobia, transphobia, and the other manifestations that come from Western Colonial culture’s assumption that there is only one right set of beliefs, appearances, and ways to live?   Is it possible to move the conversation towards accepting diversity, not only in race, but in nationality, in ability, in gender, in sexuality and identity?

Or, are we advised to wait for “a more convenient season?”

“The Time Is Always Right to Do What Is Right”, Michelle Paquette, 2019
https://michellepaquette.blogspot.com/2019/01/the-time-is-always-right-to-do-what-is.html

I had a full depth Gender Confirmation Surgery (GCS) 16 months ago, done as a single-stage procedure, but unfortunately the clitoral hood and labia minora shrank away, leaving some very sensitive spots very exposed.  There’s a reason I don’t wear pants very often!  Ow...

I now have a surgery scheduled for February 26 with Dr. Salim of the San Francisco Gender Clinic, at Kaiser San Francisco for a revision and breast augmentation (BA).

On the GCS revision, the plan is to fuse the very top of the labia majora to construct a clitoral hood, produce a pair of folds within the labia majora so as to reconstruct the labia minora, and at the posterior end the fourchette or labial frenulum, a fold of tissue joining the labia, will be lowered to be level with the introitus or vaginal entry.  (This will make dilation much easier.)

I’ll be off dilation for 3-4 days after surgery, and may have to restart using a narrower dilator at first.  Not a big deal.

I will be using that donut pillow again for a while, though.

For the BA, I’ll be getting 300cc implants.  These will be circular smooth-surface lightly cohesive with medium profile.  (Other profiles may be flat to extended or conical).  With my particular anatomy and pectoral muscle form, I will probably have the most natural appearance and improved aureole placement with an over-muscle implant, with incision in the new breast fold.  I should wind up with something like a 36C.

I’ll be on restricted activity for a month, and won’t be able to lift my arms above shoulder height for a while.  I’ll have to shuffle the kitchen around quite a bit!

And here I am, three days post-op!

There’s a little discomfort at the labiaplasty site, nothing terrible.  I did use a minimal half tablet of the Norco equivalent I was prescribed to get to sleep last night.  The breast augmentation (BA) mostly just itches around the sides of the medical bra.  The Velcro front fastening on the bra kept coming loose until I put a safety pin through it, before I even left the hospital.  Having a BA?  Bring safety pins!

This morning marked the date I was to remove the bra and shower.  Oh, what a relief that is!  Of course, the unveiling produced it’s own reaction.  For just 300cc on a side, well, damn!    The incisions are quite small, surprising me.  It looks like they will wind up right on the fold, almost invisible.  I’ll start the silicone scar treatment as soon as I am cleared for this by the doctor.

I reapplied A&D ointment (allergic to bacitracin) on the labiaplasty sutures, and put on a fresh pad again.  Bleeding has almost stopped, just a tiny amount of oozing there.  I’ve been cleaning and swapping in fresh pads twice a day.

The Foley catheter is, well, a catheter, with all its own maintenance.  I have a night bag, a leg bag for daytime, and I have to drain them periodically as well as the sanitizing after swapping bags.  I’ve been more active yesterday afternoon and today, and of course that means the catheter tip and lumen (drain opening just behind the tip) have likely been brushing against the bladder lining.  A couple of clots have shown up in the bag, right after a twinge that tells me bladder pressure dropped suddenly.  They likely used a single-lumen catheter and the tiny opening was plugged by a clot.   I have to keep an eye on this, as a plugged indwelling catheter can cause significant problems.  (I can remove it, worst case, and suspect I can now pee on my own as swelling has started to subside.)

After the shower, I had to re-don a sports bra to maintain pressure and placement.  But first...

I have a fun Tommy Bahama resortware dress, rather open on top, that was a bit problematic to wear out in public.  I’d glue on a NuBra, and apply bronzer to try and fake cleavage out of my 34A-B bust.  Now, however, I can just wear it to good effect! 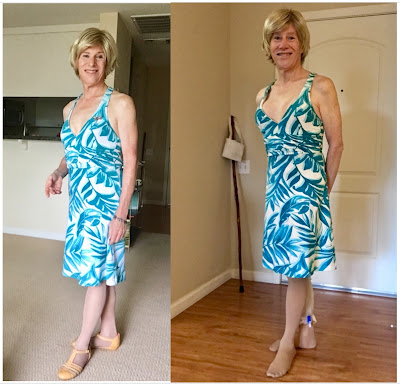 Posted by Michelle Jean Paquette at 4:19 PM No comments: